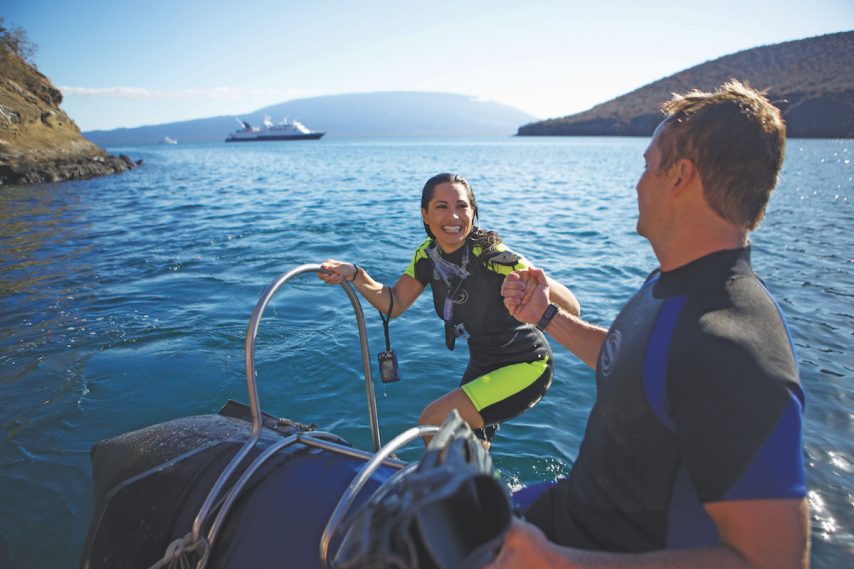 As she glides through the brilliant turquoise waters of Gardner Bay, there’s already a crowd forming along the top deck of Celebrity Xpedition. They’ve gathered for the sea lions.

Weighing in at around 600 pounds and prone to guttural barks and yelps, these salty dogs are a staple of any trip to the Galapagos Islands off Ecuador’s west coast. Lackadaisical is an appropriate word to describe the hulking masses as they roll around the beach chirping at one another, but they’ve certainly captured the attention of those on board the ship.

Excited for their first full day of adventure on board Celebrity Cruise’s 7-night Galapagos Outer Loop Itinerary, the group on board Celebrity Xpedition turns from the sea lions to examine their gear while attendants prepare the skiffs to head ashore. The real adventure starts with landfall. 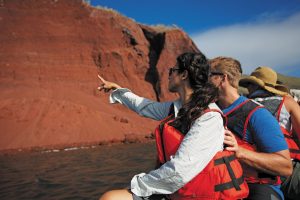 It must have been quite the sight when the first of the 19 Galapagos Islands burst forth from the ocean enveloped in a cloud of steam and smoke, spitting smoldering chunks of molten rock high in the sky then crashing to the waves below. From amidst this utter chaos, these marvelous islands were born.

Millions of years later, the island chain’s tumultuous beginnings are evident everywhere you look. The landscape, scarred by eons of flowing magma, is home to life in all shapes and sizes, prevailing all these years despite the unpredictable volcanic environment. Famed naturalist Charles Darwin found never-ending curiosities in the flora and fauna unfettered by the destructive arm of humanity and the opportunity to follow in his footsteps is more an option now than ever before. 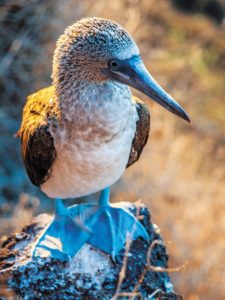 The Galapagos Outer Loop Itinerary from Celebrity Cruises tours the outer rim of the Galapagos Islands, making stops at 12 ports of call, each offering something new and exciting to explore. The voyage ends with a final stop at Puerto Ayora on Santa Cruz Island, home to the National Park Service Tortoise-Breeding Center and the Charles Darwin Research Station.

People who tour the Galapagos are undoubtedly interested in it’s geologic features, but also the opportunity to see members of the animal kingdom not found anywhere else. The islands, being so remote, feature life developed as nature intended. The ancient Giant Tortoise plods along without a predator, other than man, to fear. Blue-footed boobies, comical in looks as well as name, dive into the waves with incredible deftness to catch fish. And of course, there’s the Darwin Finches, the term for several species of small bird on which Darwin set the foundation for his Theory of Evolution. Each species thrives in the constantly evolving volcanic landscape thanks to a single principle coined by Darwin; survival of the fittest. 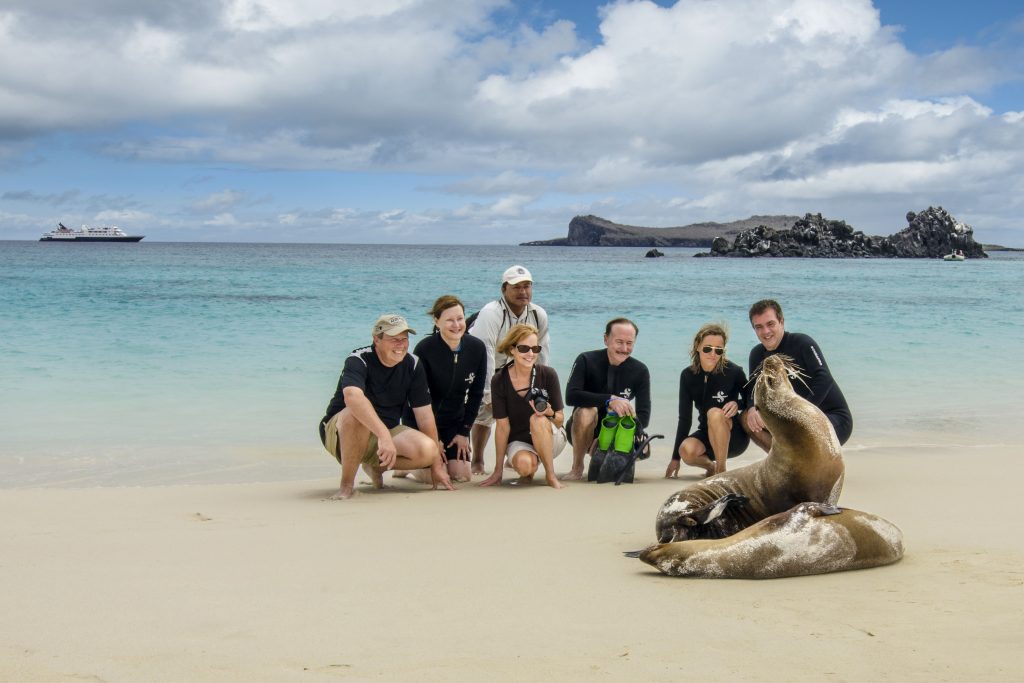 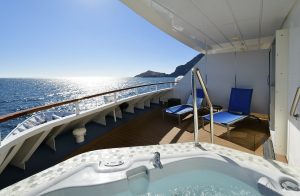 Expedition cruising isn’t like a normal cruise vacation.Large ships simply cannot cruise the same itineraries, making for a very different cruise experience. Instead, smaller ships, chock full of exploration equipment, traverse exotic locales with ease. Passengers are privileged to get closer to their surroundings and that makes for an unforgettable adventure.

Expedition cruising is not “roughing it” by any stretch of the imagination. Celebrity Xpedition, holding just 100 passengers, has all the amenities we’ve come to expect from a luxury cruise; room service, in-suite dining, massage services, plush bathrobes and even a gym. Imagine a journey of exploration and discovery, but with accommodations that rival any five star hotel and you have a voyage aboard Celebrity Xpedition.

However, there’s a new vessel on the horizon seeking to transform the way people experience this incredible island chain; Celebrity Flora.

Billed as a revolutionary turning point in ship design, performance and luxury, Celebrity Flora is set for launch in May of 2019. She was built for the Galapagos, combining unparalleled comfort with high-end adventure amenities allowing guests to get closer to the diverse environment of the Galapagos. 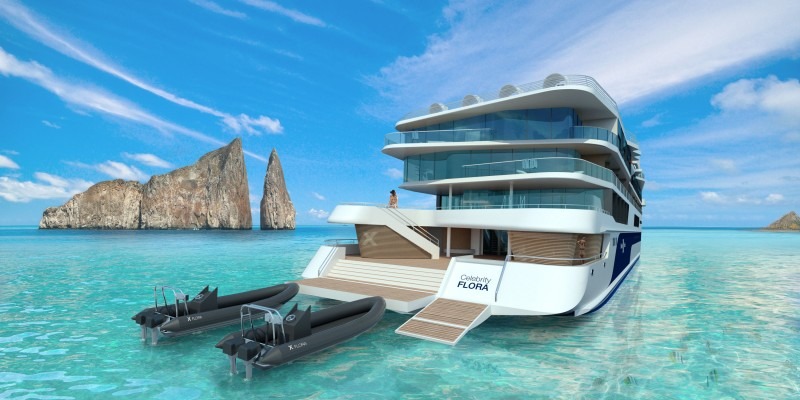 Naturalists from Galapagos National Park mingle with passengers for the entire cruise to answer questions and host lectures which teach guests more about this new and exciting world they’ve immersed themselves in. Every stateroom on board the ship is a suite and the menus are all crafted by the cruise line’s Michelin-starred chef. When it comes to luxury travel, this ship will be difficult to top.

Onboard Celebrity Flora, adventure wont be far. Are you ready to explore?