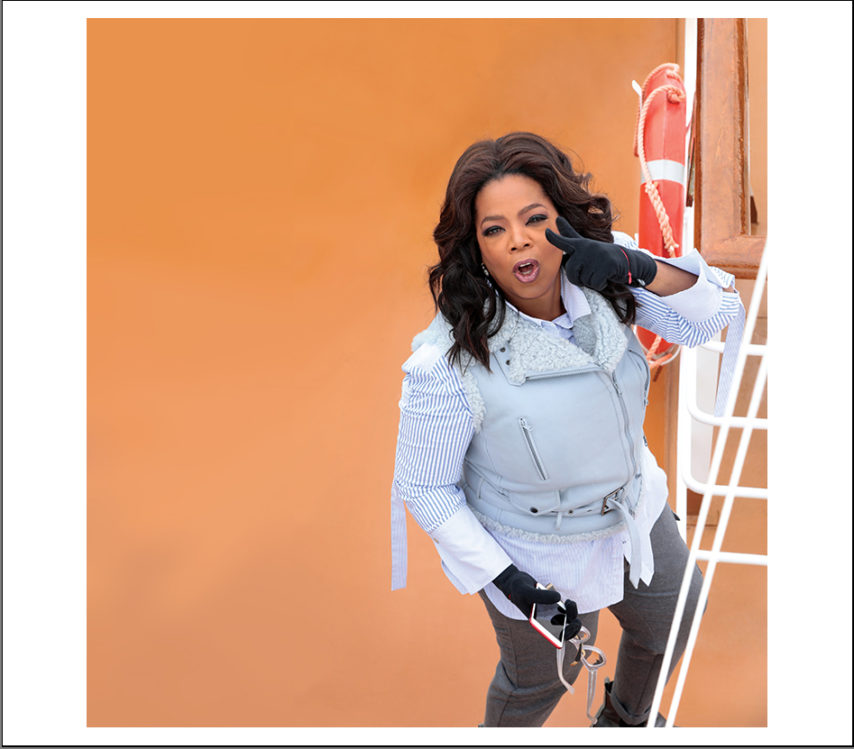 Setting sail with Oprah is the ultimate fan experience.

“Each moment in time we have it all, even when we don’t.”
Melody Beattie from O’s Little Book of Happiness

Boarding Eurodam in Seattle that day appeared unexceptional — until I approached the gangway to the ship. There, staff members were giving each boarding passenger a beautiful long-sleeved T-shirt showing off the “O” logo of O, The Oprah Magazine. The stage was being set for the week.

Certainly passengers aboard Holland America Line’s first O, The Oprah Magazine Share the Adventure Cruise boarded full of excitement and anticipation at the prospect of rubbing shoulders with the Queen herself. It quickly became evident to me why: Oprah Winfrey is a phenomenon.

The Week at a Glance

Choosing this special cruise was not just to sail with Oprah, but to engage with an entire program designed and catered to individuals who share her ideas and philosophy. Most impressive was the lineup of featured speakers for the week.

Every day the stage was set with half an hour of meditation by the pool, led by yoga and meditation guru Sara Ivanhoe. Other onboard activities were a well-orchestrated mix of readings, lectures, music, games, and physical activity. Much of it was interactive and we had the opportunity to meet and converse with these amazing people, including singing artist India.Arie, authors Glennon Doyle and Elizabeth Strout, and food evangelist Elettra Wiedemann, just to name a few.

Each evening, passengers returned to their staterooms to find a gift waiting for them. This wonderful extra touch included a visor, water bottle, a book, a pair of gloves, and a journal.

Shore excursions should always be taken advantage of, as Alaska is an absolute must see with scenery to die for, especially Glacier Bay National Park. Eurodam spent a few hours facing Margerie Glacier, for example, where we were so close we could hear the ice breaking apart and applaud the large pieces carving off the glacier. Every day brought something exciting, from wildlife spotting on shore to whales making frequent appearances.

On board, I very much enjoyed “The Making of O,” The Oprah Magazine presentation at which….

A lazy summer day, and the tantalizing aroma of barbecue drifts through the air. Maybe it’s the citrusy scent of fresh-caught salmon squeezed with lemon, or the…