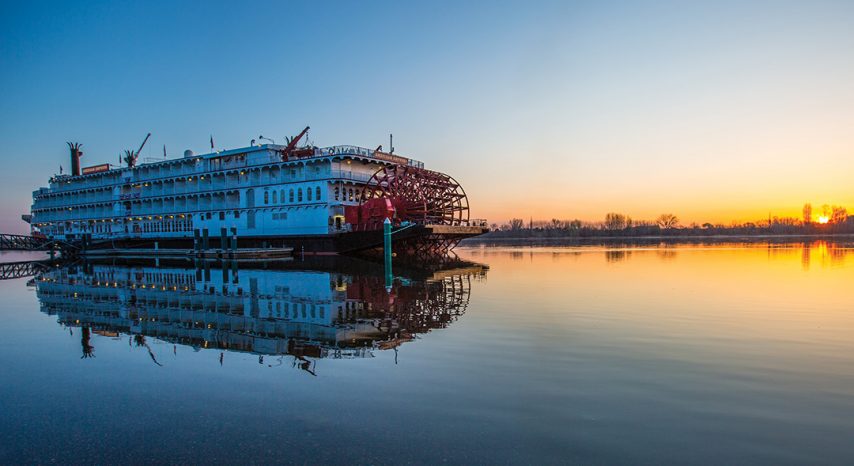 It begins with a hiss that builds into a melodic whoosh, as clouds of steam pour out of the brass whistles. A bright red paddle wheel churns the water. The steamboat American Queen is back, returning to the Mississippi and Ohio rivers after an absence of nearly four years. Significantly, it also signals that cruising is returning to the rivers of America, which in recent years have largely been ignored, while European river cruising has grown at an astoundingly fast pace.

There are few things more closely tied to the heart of Americana than the sight of a paddle-wheel steamboat. Ever since the first trip down the Mississippi in 1811, there have been hardworking little boats and the floating palaces immortalized by Mark Twain in his novels and essays. Out of the thousands of steamboats to come before it, the American Queen is the only overnight passenger vessel propelled by steam that remains in service in the United States.

The American Queen was rechristened on April 27, 2012, by Priscilla Presley, appropriately in its home port of Memphis, Tennessee. The city has played an integral part in bringing these iconic steamboat back into service. Many of the cruises now depart from the new Beale Street Landing, specially constructed to handle the growing influx of visitors by river.

The largest river steamer ever, the American Queen was built in 1995 to carry 436 passengers in authentic Victorian surroundings. Many of the furnishings in the public areas and staterooms are antiques. Among the many beautiful features on board, the J.M. White Dining Room is perhaps one of the most impressive restaurants that can be found today on any cruise ship, either ocean-going liners or riverboats.

Designed to replicate the Main Cabin of the 1878 steamboat J.M. White, domed sections rise on either side of the hall, with huge tapestries decorating the forward bulkheads and large mirrors reflecting the length of the room. Tall windows with velvet drapes and potted palms grace the perimeter. Whether dining from the buffet or enjoying a sit-down meal, passengers are impressed with the commanding luxury of this grand dining room.

On the opposite end of the same deck, the Grand Saloon is designed to resemble a 19th-century opera house combined with elements from Ford’s Theater in Washington, D.C. The two-deck showroom has a large dance floor and seating on the lower, Main Deck level, while the upper Cabin Deck level contains six sections devoted to box seats and a balcony. Chandeliers and original artwork enhance the elegance of this entertaining room. A traditional grand staircase of wood and brass connects both levels of the lobby. The Mark Twain Gallery is a quiet lounge that overlooks the dining room and leads to the Ladies’ Parlor and the Gentlemen’s Card Room, two small but lavishly appointed lounges of a kind that was once found in nearly all steamboats and plantation houses ashore. For shoppers, the AQ Emporium stocks a selection of quality merchandise and souvenirs.

All the way aft, the Engine Room Bar has portholes looking out to the rapidly turning paddle wheel, with open-air porches on either side providing spectacular views. Rather unusual among cruise vessels today, access is provided through the bar into the actual engine room where the mechanically interested can view vintage machinery dating back to 1927 and originally constructed for another steamer. Even the pilothouse high atop the boat can be toured at designated times.

Dining aboard the American Queen immerses passengers in the regional cuisines of the South and Mid-America. The ship’s celebrated chef and culinary director, Natchez-based Regina Charboneau, provides her personal touch to each menu. While far from low-calorie, a spread like the bananas foster French toast stuffed with cream cheese, a side of skewered bacon coated with brown sugar, and hot beignets makes for a decadent breakfast splurge. Both breakfast and lunch are served at open sittings and guests can order from the menu or select items from the extensive buffet. A formal, five-course dinner is served each evening at either early or late seating. Wine and beer is complimentary at dinner. Dress is country-club casual with no jackets or ties ever requested.

For those preferring an even more laid-back atmosphere, the Front Porch of America serves light food and snacks 24 hours a day. Lunch and dinner can also be found outdoors at the River Grill, high above the paddle wheel and surrounding the Calliope Bar.

While excellent food, service, and entertainment are among the most important elements of a successful cruise, it’s the little things that count as well, and the American Queen provides items that most other cruise lines don’t. All soft drinks, fruit juices, tea, Starbucks coffee, lattes, cappuccinos, and bottled water are available without charge at the Front Porch of America. Soft serve ice cream cones are a treat as well. Eight selections of beverages can be dispensed from what one passenger described as “the best coffee machine ever!”

There are six basic types of stateroom accommodations, priced in 14 categories and arranged over four of the six decks. On this boat, your cabin doesn’t just have a number, it has a name. In fact the term “stateroom” originated with steamboats, and on the American Queen, you might reside in one of the 50 states or be ensconced in a room named after a famous person or one of the rivers of America.

While some staterooms boast private balconies and others, arresting floor-to-ceiling bay windows, most cabins open onto the outer decks. Suddenly, watching the passing scenery from your open cabin doors becomes a very important part of life. Chairs and a table are provided for each room along the shared promenades. Cozy inside cabins are available for those on a tighter budget. Single travelers will especially appreciate the selection of the eight inside cabins and four outside staterooms offered without a supplement.

While most travelers on the American Queen were in the 50-plus age group, some were considerably younger. Tiffany Mohre, of New Orleans, just 19 years old and traveling with her mother, described the trip as a “very interesting, very peaceful, unique special experience. The people have been great and the food’s been great, much better than a standard ship.”

Howard and Rosalie Gordon, from Weston, Florida, veterans of numerous ocean cruises and trying their first river cruise, concurred. “The staff has been extraordinarily friendly and helpful. On other trips, the language barrier can be difficult, but here with Americans, we communicate on the same level.”

The Gordons added a thought that many aboard also expressed: “We wanted to see this country, and nothing was available until recently. We’re converts to river cruising and will probably come back and do one of the Civil War-themed cruises to see the battlefields and historic sites.”

Even members of the crew are enthusiastic about traveling on inland rivers while working aboard the historic steamboat. Gillian Fraser, a 21-year-old waitress in the dining room, said, “I’m having a great time. I plan to enjoy the experience and continue on the rivers.” A sense of camaraderie pervades aboard the American Queen, and that adds up to a memorable experience for all.

All voyages with the American Queen Steamboat Company include a complimentary overnight hotel stay the night before departure. This eases the stress of potential flight delays while allowing guests to begin their vacations exploring the embarkation city. The highly inclusive nature of these cruises goes a step farther with complimentary, hop-on-hop-off shore tours in each of the ports, with admissions to many of the attractions included. A dedicated fleet of buses, known as Steamcoaches, are decorated to look like a steamboat traveling along the highways. It is a really wonderful enhancement to the equally wonderful experiences on the water.

In the long history of steamboating, the latest chapter is just beginning to be written. Here in the 21st century, the sound of a steam whistle and the sight of a big red paddle wheel once again signal that the American Queen is back in business on the rivers of America.