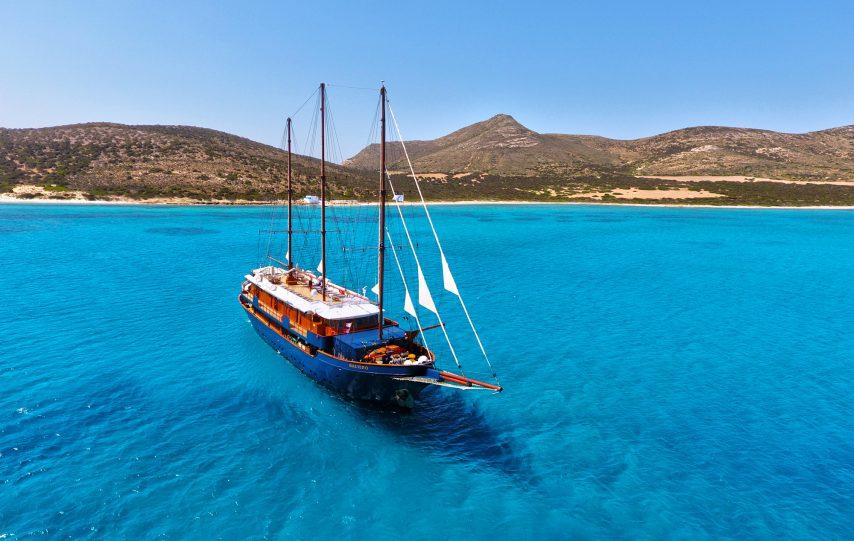 Was it a quest calling my name? Was it yearning to do, well, anything in the midst of a pandemic? Was it nostalgia?

It’s hard to pinpoint exactly what the motivation was, expect it kept directing me towards Greece, where in the midst of the dark days of the pandemic, I discovered Variety Cruises’ Galileo and its seven-day circuit of the Cyclades Islands from Athens.

The line first began in 1949 as Zeus Tours, and I soon found that Galileo, in addition to being one of the first passenger boats to set sail since the start of the pandemic, happened to be the same Galileo that I had been on some years before in the Greek islands. I had always cherished the memory of those ports and the people I’d met and stayed in touch with; perhaps Pothos, the Greek god of yearning and nostalgia, was calling me back to those more carefree, less COVID-y days. The word nostalgia comes from “nostos,” the Greek word for return by sea, illustrated by Odysseus’ quest for his home on Ithaca.

Whatever the unexplainable drive, my quest was, simply, Greece, and Galileo offered the perfect escape. Using my U.K. passport to travel, I was able to get to Greece and book two back-to-back seven-day cruises. Even though the itinerary would be the same both weeks, I knew a mere single visit to any of these islands would not be enough.

Carol Loven started her career working on the Delta Queen steamboat. Jobs on several British ships led to sailing through the oceans and seas of the world while teaching English to a multilingual crew. Three years as librarian on the legendary QE2 provided the experiences of a lifetime, including earning a steering certificate for learning to drive the ship on a world cruise.

View all posts by Carol Loven