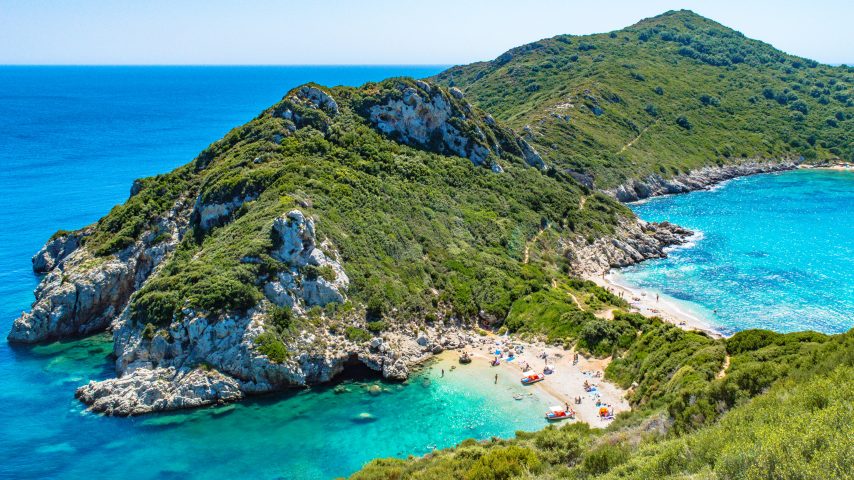 To the Northwest of the Greek mainland, there sits an island where history and adventure await. The island of Corfu, part of the Ionian Islands, has long been a central figure in Greek history and mythology. The island, known for its fabulous beaches and iconic architecture which often blends into the landscape, has long been a spot for curious travelers seeking a fun and relaxing vacation. Visiting Corfu on a cruise vacation or on your own is like taking steps back in time. Remnants of Greece’s prosperous past are all over the island and offer a vacation with a perfect mix of intrigue and relaxation. If going to Corfu isn’t on your travel bucket list, we’re here to change your mind! 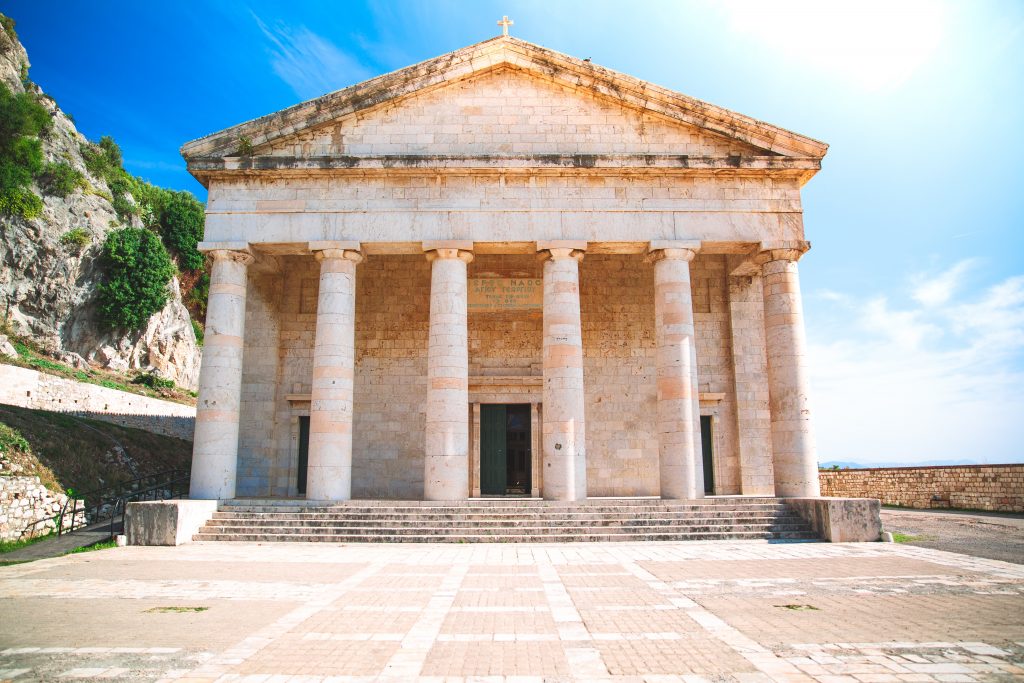 There’s so much history to explore on Corfu

Corfu: The Gem of the Ionian Sea

Known as Kerkyra to native Greeks, Corfu sits to the west of the mainland in the Ionian Sea. Its position had a tangible effect on the island’s development over the years with the first people reaching her shores thousands of years ago. Corfu has seen its rule change several times over the years from Romans and the Venetians to the French and the British throughout history and that led to a rich multi-cultural heritage where art, music, literature and education were at the forefront of daily life.

Strategically, the island was a maritime stronghold with forts positioned all over the island, including two in the Old Town of Corfu, a UNESCO World Heritage site. Located on a peninsula on the island’s East Coast, the town of Corfu is known for its small streets called “kantounia” and a main promenade known as Liston Square which features gorgeous arcaded terraces and outdoor cafes. The Square is the city’s trademark and a must-visit for anyone exploring the island.

The main city of Corfu, named after the island, is a treasure trove of sights and culture. From outstanding architecture to authentic Greek cuisine, you can spend the whole day exploring the city. However, there’s a whole island out there to explore, including some of Mediterranean’s best beaches. Located on the island’s north coast, Sidari is a beachside town where sun and relaxation are readily available. The beautiful beaches are surrounded by unique rock cliffs including the famous Canal d’Amore. It’s said that anyone who swims through it finds true love! 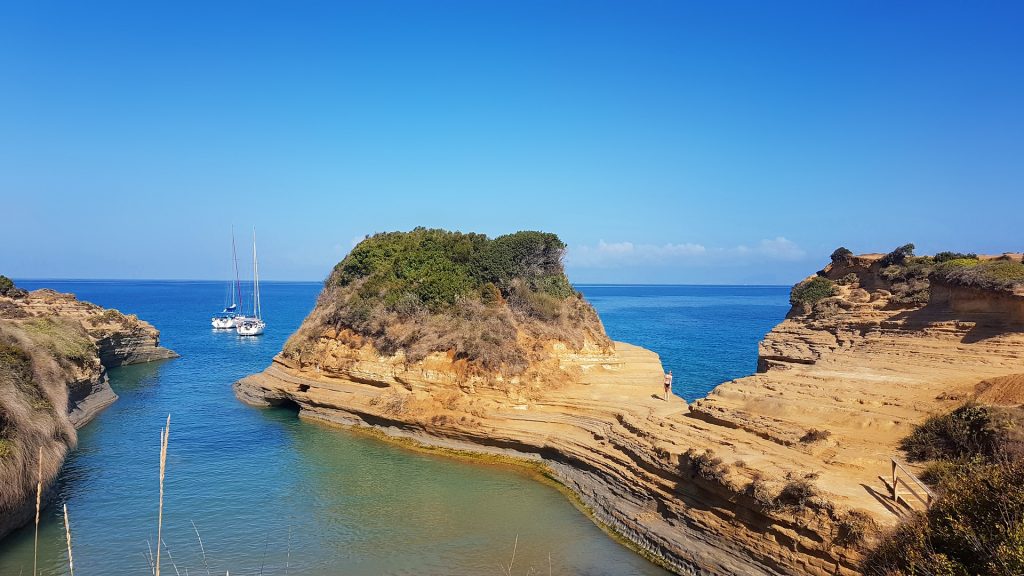 Palaiokastritsa, a region located on the island’s Northwestern coast, has long been a popular spot for visitors thanks to its place in Greek mythology. Palaiokastritsa was the place Odysseus swam ashore after Poseidon destroys his raft in Homer’s epic poem The Odyssey. Kolovri, a rock island off the coast of Palaiokastritsa, is said to be Odysseus’ ship that Poisedon turned to stone.

One of the most popular attractions is an acropolis along the coast to the west of the city. Sitting 1,000 feet high, the acropolis offers stunning views of the surrounding coastline, a trait very useful for defense throughout history. Protected by steep slopes on two sides, the castle atop the hill seamlessly incorporates the surrounding geography and natural beauty. Palaiokastritsa features six coves with golden sand as well as the shady olive groves and pine-covered hills found outside the city. 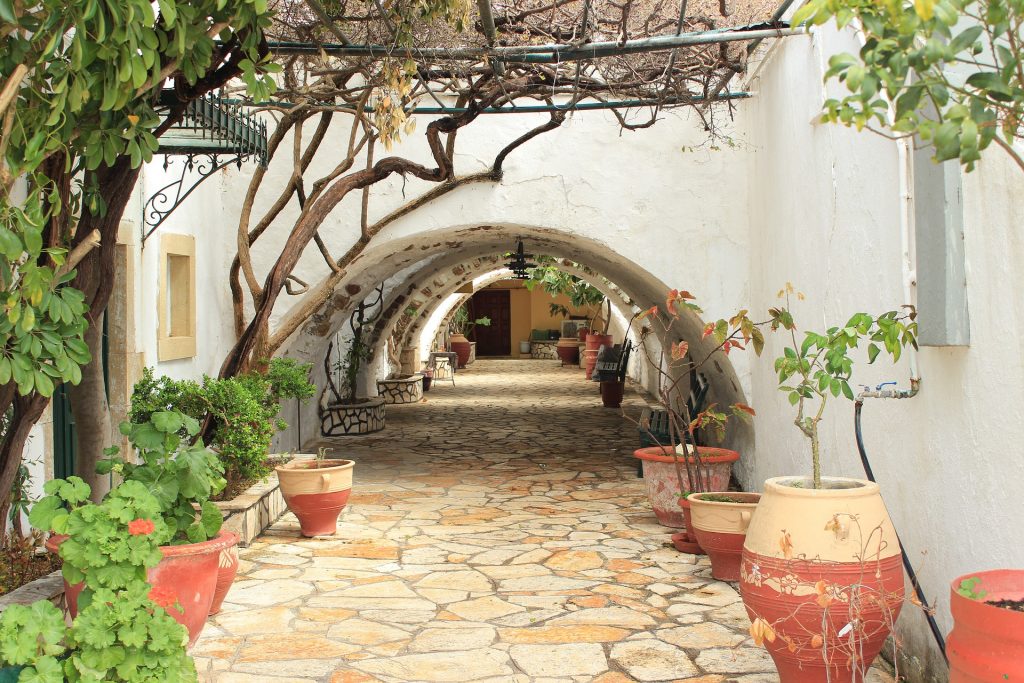 In all, there are more than 50 beaches on the island of Corfu and they range from sheltered bays with soft, golden sand to pebble beaches with crystal clear water. While there are beaches nearby to most of the island’s cities, many choose to explore the many hidden remote capes where you won’t find the usual crowds and amenities. They are truly an escape to paradise!

Some of the most popular beaches on Corfu include:

Along with fantastic beaches and luxury resort accommodations for those looking to spend a few days or even weeks in this island paradise, visitors should check out the many monasteries and castles which dot the coastline. That they’re still standing after hundreds or even thousands of years is a testament to Greek architecture and craftsmanship of the time period.

So, how do you want to spend your Greek island vacation? You could explore thousands of years of history or spend the afternoon on a pristine beach thousands of miles away from all the problems of home. The choice is entirely yours. Corfu is a slice of paradise that feels a world away from everyday life. Sprawling mountains, stunning coastlines, quaint villages and eons of history make Corfu your next great vacation. What are you waiting for? Start planning your island getaway today! 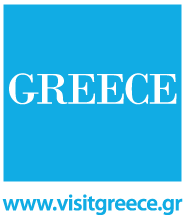