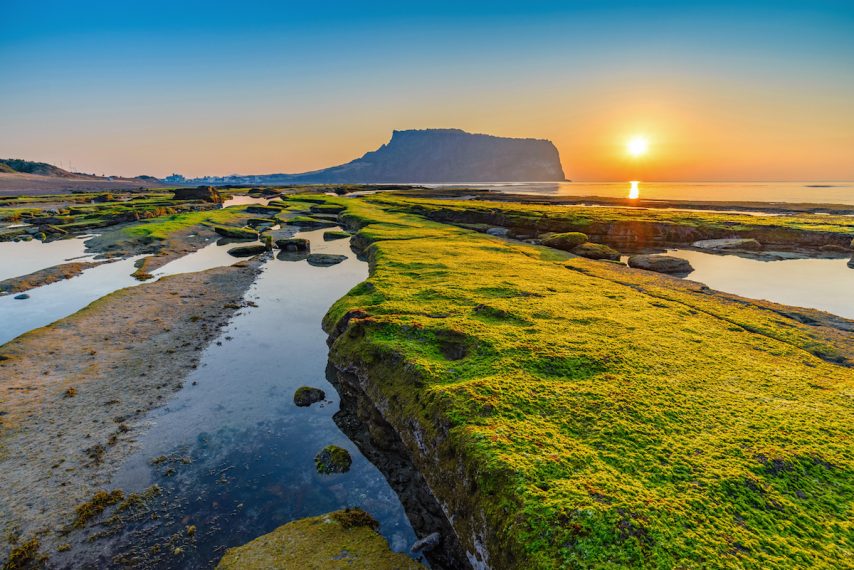 Dubbed the “Hawaii of Korea,” this volcanic island has been named a World Natural Heritage Site and one of the New7Wonders of Nature. The scenery is beyond gorgeous. Hallasan Mountain, the tallest peak in South Korea, rises nearly 6,400 feet in the center of the island, with its slopes tumbling to the shores of a picturesque crater lake. Surrounding it is an otherworldly landscape of craters and caves and underground tubes, black lava beaches, and rushing waterfalls. There are soft, golden stretches of beaches, too, along with traditional villages to explore, scenic trails to hike, and local specialties to savor. Clearly, there is much to absorb … and so many unique ways to enjoy this dazzling jewel off the coast of South Korea.

Jeju is known for its traditional dishes and unique specialties, from abalone caught by the local “sea mermaids” to barbecue black pork from pigs bred only on the island.

Try the abalone stone pot rice and grilled abalone at Myeongjin Jeonbok (1282 Haemajihaean-ro, Gujwa-eup, Cheju). Abalone is the only thing they serve at this casual, waterfront restaurant, and they do it right.

For Jeju’s famous barbecue black pig, head to well-known Donsadon (19 Uopyeong-ro, Jeju), where they grill thick slabs of pork over a briquet fire and serve it with kimchi stew and salted anchovy sauce.

Diners up for an adventure should try the traditional seafood hot pot at bustling Samaunghyeol Haemultang (20, Seondeok-ro 5-gil, Jeju). The soup comes brimming with live seafood (maybe topped with a squirming octopus!); watch as it cooks to your liking.

For Jeju-style comfort food, try “hangover soup,” made from slow-simmered pork and beef bones. Queue up for the spicy beef version at Ujin Haejangguk (11 Seosa-ro, Jeju), served thick and creamy with shredded beef.

Hallasan is for View Seekers

Hallasan National Park is home to South Korea’s highest mountain, designated a World Natural Heritage Site and UNESCO Biosphere Reserve. There are two trails to the top of the more than 6,400-foot volcanic peak; both are steep, but the trek is worth it for eye-popping views of the deep-blue crater lake and surrounding slopes. No worries if you’re not feeling up to the climb, or are short on time. There are easier trails in the park, with fine views, leading through lush forests and flowering hillsides, in the shadows of Mount Hallasan.

Do go chasing waterfalls. Easy-to-access Jeongbang Falls is one of the most dramatic on the island, tumbling some 75 feet down a rocky cliff into the ocean. The cold and clear Cheonjiyeon Waterfall, surrounded by lemon trees, camellias, and other rare plants,

drops from the ceiling of a cave; it’s particularly dramatic (and romantic) at night when it’s illuminated with soft yellow lights.

Daybreak is the best time to visit Seongsan Ilchulbong (Sunrise Peak). A well-marked path and set of stairs leads to the top of the cone crater, a dramatic place to watch the sun rise over the sea.

The Haenyeo Museum tells the story of the island’s famous female divers, who gather abalone and sea urchins from the depths of the cold sea — without scuba gear. Many are well into their 60s and 70s, often working up to five hours a day, free diving for seafood to sell in the local markets and fish stands. The museum includes a traditional haenyeo home and exhibits on the island’s rich fishing culture. And then, go see the haenyeo dive. One of the best places is Jungmun Beach, or the waterfront surrounding Seongsan Ilchulbong.

Get a glimpse into the past at Jeju Folk Village. Spread over 40 acres, the living history museum includes more than 100 restored homes and….

By Diane Bair and Pamela Wright