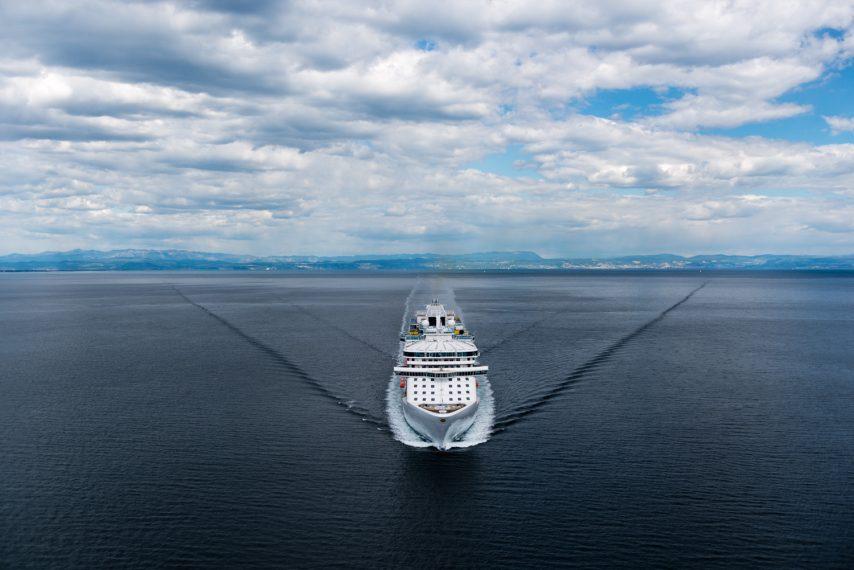 Christened by Her Royal Highness The Duchess of Cambridge, Catherine “Kate” Middleton, this past June just before she gave birth to baby George, the 3,560-passenger Royal Princess spent the summer sailing the Mediterranean to rave reviews. As the new ship — the first for the fabled line in five years — begins a Caribbean season full of seven-day sailings out of Fort Lauderdale, many creative new “firsts” for Princess can be found on board, including greatly expanded eating options that have put Princess at the head of the table when it comes to varied dining at sea.

The Atrium and Beyond

There are many hallmarks in the layout of Royal Princess, including the greatly expanded atrium that’s more than 50 percent larger than any of the line’s other ships. The bustling atrium now includes three decks full of entertainment, ship services, and eateries, plus standard and new shopping options — including the new Celebrations gift shop for indulgent sweets and other various celebratory possibilities.

The ship’s Lotus Spa has even been relocated lower in the new ship, forward of the atrium, rather than its typical position much higher on most ships. It includes an exclusive “thermal suite” area called The Enclave at Lotus Spa, which features warm stone beds, airbed recliners, and a hydro pool. When the ship is underway, the sound of water passing over the bow can be quite soothing.

Did You Say Big TV?

The ship’s varied staterooms also provide another quiet — or entertaining — haven. The addition of in-your-face 37-inch flat-screen TVs for every stateroom has been a huge hit, with pause-able movies and TV shows, cable and satellite programming, music, and more. Making up almost half of the ship’s stateroom offerings, “standard” balcony cabins are the norm on Royal Princess. They include a small sitting area, a desk/vanity, spacious closet, bathroom, and balcony with patio furniture. A new-for-Princess “deluxe” balcony stateroom adds a bit more space inside and out, with the addition of a sofa bed and many upgraded amenities.

Turn Off That TV

Out in the ship proper, the entertainment options continue. Movies Under the Stars, Princess’s signature outdoor theater option, is back on board with a high-def screen that’s twice as large as any on previous ships. They’ve also added a new water and light show at the tropical island in the Fountain Pool area.

Inside, Princess Live! is another new and creative offering from the line. This is the first TV studio at sea with broadcast-ready entertainment of all types — including lectures, live performances, late-night comedy, game shows, culinary demonstrations, and more. Princess Theater and Vista Lounge provide more traditional settings and entertainment, while Club 6 is a cool and hip new nightclub-like option.

The lounge creativity continues with the new Italianate Bellini’s Bar, as well as expanded versions of Princess favorites like Crooners and the nautical Wheelhouse Bar, where three different whiskey flights have proven very popular. Back outside, up on Deck 17, SeaView Bar juts out from the ship over the water to provide a unique drink with a view. Across the ship is the much-talked-about SeaWalk, a glass-bottomed walkway that extends 28 feet over the edge of the ship — with views 128 feet down to the ocean and onto many midship balconies.

And, then, there’s the dining. Quite simply, it’s bigger and better than on any Princess ship … and that’s saying something.

It starts with the main dining rooms down on decks 5 and 6, but it goes well beyond their ornate settings. The smallest dining room, Allegro, hosts traditional fixed seatings, as well as the very special Chef’s Table Lumiere, which is one of many specialty dining options onboard — with a custom-made wood table and glass sculpture centerpiece surrounded by shimmering privacy curtains providing the setting for the chef’s specially prepared meal and paired wines.

The Symphony and Concerto dining rooms welcome Anytime Dining passengers with expanded hours. They also serve as the setting for the ship’s Wine Maker’s Dinner, which takes place in a circular area surrounded by walls of wine bottles and features a another special meal paired with wines.

Specialty dining continues with the Crown Grill, adjacent to the Wheelhouse Bar. Here, an open kitchen serves up premium Sterling Silver steaks, chops, and fresh seafood. Princess veterans will also be glad to see an expanded Sabatini’s concept, with an Italian-inspired décor, menu, and, especially, the wine list — the ship has the largest collection of Super Tuscans afloat. The Branzino in Crosta de Sale (sea bass in herbed salt crust) for two is well worth sharing during a lingering dinner. Diners can also take a taste of Sabatini’s to their kitchens back home, as Segesto, the line’s exclusive Sicilian extra-virgin olive oil, is available for purchase.

With no additional charge for world-class whole pizzas and more, Alfredo’s pizzeria in the Atrium is back with some of the best Neapolitan-style pizza at sea, as well as Italian antipasti, soups, salads, baked pastas, calzone, and desserts. It’s currently the largest pizzeria afloat.

The Atrium features another expanded version of Princess’s popular 24-hour International Café. Nearby, they also added the Tea Tower, with a selection of more than 200 tea blends, the advice of a tea sommelier, and a new Royal Afternoon Tea Experience inspired by London’s finest afternoon tea venues.

An expanded Vines wine bar is also back, with unique wines by the glass, bottle, and flights. For those enjoying the fruits of the vine, Vines serves up complimentary small plates that provide an appetizing taste of nearby Sabatini’s.

The Ocean Terrace seafood bar is a popular new addition to the Atrium area. Along with complimentary appetizers served to those ordering drinks, many fresh seafood dishes are available a la carte, including fresh sushi and sashimi and varied seafood samplers.

The complimentary “pub lunch” proved quite popular when it debuted with the line in 2008 and it’s been expanded on Royal Princess. Offered in the Wheelhouse Bar and adjacent Crown Grill, a full traditional pub-style lunch is featured on sea days, while fish and chips and a ploughman’s lunch are offered up on port days … with, of course, a selection of popular United Kingdom beers.

Along with the sweet treats at International Café, dessert options in the Royal Princess Atrium area include Gelato, a combination gelateria and creperie. The expanded options here include favorite gelato flavors, sundaes, more than 20 toppings and sauces, and sweetcrespelle, which are Italian crepes.

At night, the Horizon Bistro portion of the sprawling dining area features themed events, like German Beer Fest or a European bistro, Brazilian churrascaria, and more, as well as two unique new specialty dining options: the seafood-focused Crab Shack night and Fondues, featuring a classic evening of fondues and more.

It’s a selection of feasts fit for any monarch!