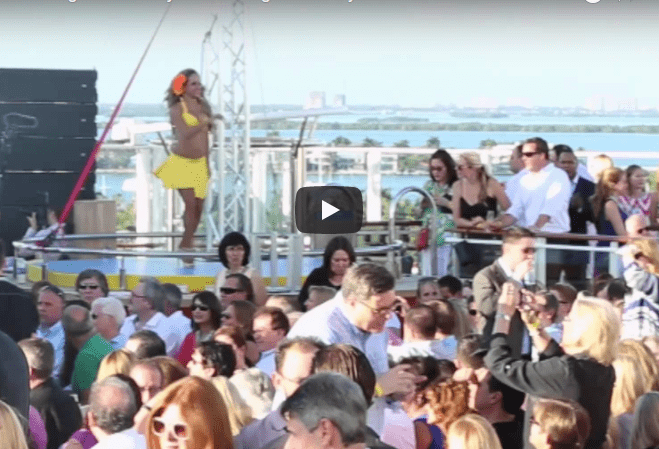 Norwegian Getaway brings the excitement of the Magic City to the high seas.

By Fran Golden
Check out the hot highlights of Norwegian Getaway’s christening celebration.
If you’re going to bring out a ship that shows off the excitement of Miami, you either go big or go home. When it came time to welcome the brand-new 4,000-passenger Norwegian Getaway to its homeport, Norwegian Cruise Line went big.

All of the fun features of New York–centric sister ship, Norwegian Breakaway, are back on the line’s newest ship — from the thrilling Aqua Park with five waterslides; the 40-activity Ropes Course that features The Plank, an eight-foot beam that actually juts off the ship; and SpongeBob and other Nickelodeon characters who delight kids in the expansive Splash Academy.
Sailing weekly to St. Maarten, St. Thomas, and Nassau, Norwegian Getaway is the largest ship ever to homeport in Miami year-round. Referred to as “Miami’s ship” by the line, there is plenty of local theming to remind you of this. With Latin cuisine and music, murals of Florida landmarks, and parties designed to rival anything on South Beach, Norwegian Getaway is Miami cool, brought to sea.

The action-packed celebration of South Florida includes two new bars. At the Sugarcane Mojito Bar, where brass palm trees set the scene, concoctions include a Jalapeno Cucumber mojito made with fresh peppers, or a mojito-tasting that lets you sample several varieties. At the Sunset Bar, passengers can imbibe in a setting that subtly pays tribute to Ernest Hemingway’s Key West, complete with a fish hanging over the bar and black-and-white photos of “Papa” on the walls.

The bars are off The Waterfront, the ship’s enticing quarter-mile promenade, where bars and restaurant have seating both indoors and out, so you can watch the waves and enjoy the tropical Caribbean breeze — particularly delightful at sunset.

For something completely different, Norwegian Getaway‘s SVEDKA/Inniskillin Ice Bar, where the temperature is always 17 degrees, is done up with ice sculptures reflecting Miami’s Art Deco landmarks and an ice throne flanked by an ice alligator. Fun fact: The ship serves 21 brands of vodka including Voli Vodka, Pitbull’s preferred brand (he’s the spokesperson).

There is a new Latin focus to the ship’s cuisine as well, most noticeably in the open-air, upper-deck Flamingo Bar & Grill, where passengers can select Cuban treats from a buffet that includes rice and black beans, pulled pork, and fried plantains. There are also empanadas at the bar and carts positioned around the ship that also serve up other complimentary Latin snacks.

Among the 27 dining options (some for a fee), the ship’s complimentary supper club, The Tropicana, is the most stunning space, a two-deck-high affair done up to look like a 1940s Miami supper club. It comes complete with an excellent Latin trio playing for diners’ dancing pleasure, waiters in white jackets who serve dishes including whole bone-in pork loin, and, three nights a week, dancers from Burn the Floor entertain with sizzling Latin moves.

With updated menus, other dining options will be familiar to Norwegian fans — from the Teppanyaki ($25 per person) experience, where the chefs prepare a meal before your eyes and have way too much fun in the process, to the date-night French spot Le Bistro ($20 per person).

As introduced on Norwegian Breakaway, the must-do foodie experience is dinner at Ocean Blue ($49 per person), the restaurant created by New York–based Iron Chef Geoffrey Zakarian. Black sea bass and sinfully rich lobster risotto are among the specialties. For a lunch treat, try the lobster sandwiches ($9.95 each) sold at the Ocean Blue on the Waterfront take-out window.

An excellent place to people watch is the Ocean Blue Raw Bar or adjacent Wasabi sushi bar, both part of the action on 678 Ocean Place, the ship’s three-deck entertainment hub. Also head to Spice H20, the lively outdoor club, where parties under the stars include a 1980s night complete with retro music videos on the big screen and fireworks.

High up on the ship, The Haven is the private ship-within-a-ship retreat for passengers in suites — complete with private restaurant, pool, and sundeck equipped with plush loungers and daybeds for two.

While the ship has expansive sunning areas — a bonus in the tropical climate — passengers who want cushy lounging can pay for a pass to the adults-only Vibe Beach Club, where a VIP party scene unfolds at night.

Solo travelers can get to know each other in their own lounge in The Studios, where 59 staterooms are cleverly designed for one occupant.

A preferred daytime hangout spot is the Café on the Atrium, in the three-deck atrium, where you can watch live game shows, concerts, and action on a giant movie screen while sipping Lavazza coffee drinks and munching on treats (a fee applies) from Carlo’s Bake Shop, the bakery featured on TV’s Cake Boss.

At the Mandara Spa, signature treatments include a 24 Karat Gold Facial ($325) and the extensive fitness program includes such activities as boxing and FLYWHEEL cycling (for a fee).

The other big entertainment addition, and an immediate hit, is The Illusionarium, an extraordinary magic/dinner show experience with five master magicians, illusionists, and mentalists performing in an eerie video dome as you dine on surf and turf (admission is $24.99 to $29.99). It’s the ship’s absolute must do.

The Art of Norwegian Getaway

Passengers on the first two Norwegian Getaway sailings got an unusual treat — the opportunity to see a noted artist create art, live.

You can’t miss Cuban-American artist David “LEBO” Le Batard’s artwork: The Post-Modern Cartoon Expressionism style is on display on the hull of Norwegian Getaway in the form of colorful ocean swirls and a giant mermaid holding the sun.

When LEBO appeared on stage in the ship’s theater for a live art performance, the South Florida–based artist didn’t speak. Wearing a black T-shirt, pants, and beret, he simply approached a large white canvas and began painting — his back to a crowd of hundreds of passengers.

Rock music blared as LEBO’s own choreographed videos appeared on the theater’s large screens. The artist wrote the words “This is” in black on the blank canvas — words he would later cover with colors. The art-loving audience watched in silence as LEBO pulled brushes, paints, and markers from their perch on the top of storage trunks. Sometimes he kept a brush in his mouth to grab quickly.

A tiger face appeared, then orange pitchforks, then various shapes and patches and splashes. Soon the pitchforks had faces on top. Teal, gold, orange, red, and black appeared on the canvas.

The Heavy’s “How You Like Me Now” played on the sound system, as LEBO painted clown-like faces, stood back from the canvas, and then added more color and outlines in black. Blues melded with yellow to create green. He occasionally nodded his head in approval, but otherwise he was all concentration. And he had the audience’s rapt attention.

LEBO added white stars and the painting somehow took on a heaven and hell allegory — or at least I think it did. There was the overseeing tiger, wise men, and pitchfork creatures. Some 55 minutes later, he stepped back and smiled. The painting was complete. LEBO received a round of applause from the crowd.

The painting was later sold at a shipboard auction for $25,000.

Besides on the ship’s hull, Norwegian Getaway passengers can see LEBO’s art on display shipboard, including in the Café on the Atrium.