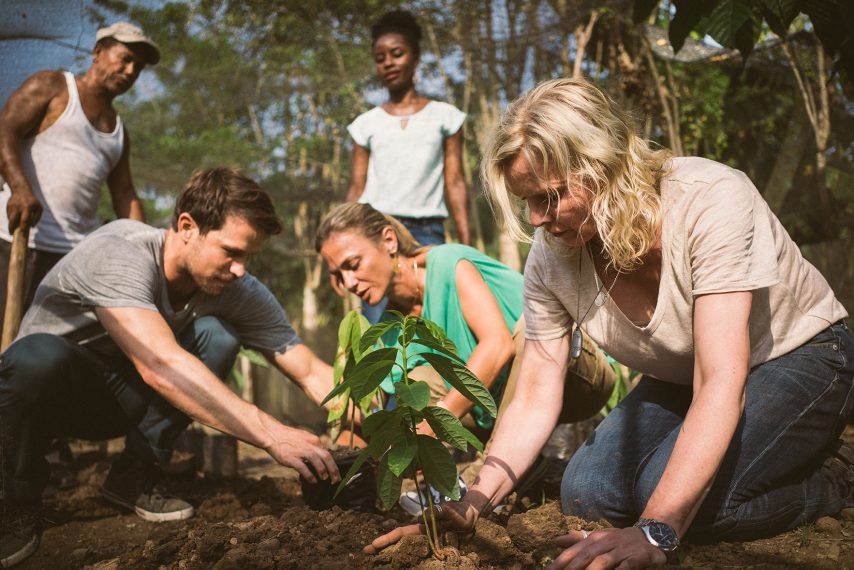 A cruise giant has opened a new market for vacationers who want to make a difference. Carnival Corp., the world’s largest travel and leisure company, today launched a new brand called fathom, defining a new travel category it is calling “social impact travel.”

What sets fathom apart is the long-term approach. The brand partners with countries in a systematic way, using a unique business model that allows for sustained involvement long after a visitor’s 7-day cruise is over.

The first itinerary is slated to depart Miami, spend a day at sea engaging in onboard training exercises, then four days in the Dominican Republic working with local aid organizations while enjoying one of the most beautiful islands in the Caribbean.

Tara Russell, social entrepreneur and founder of Create Common Good, was brought in as president of the brand.

“We created fathom to meet the real hunger in the world for purpose, while at the same time tackling profound social issues through a sustainable business model,” she says. “Because fathom will bring hundreds of travelers to a destination on a regular basis, fathom can achieve focused and holistic, collaborative contributions in a broad region of the country – allowing fathom travelers to make a collective, transformative impact that they know will extend far beyond their involvement. They also will know they played an important role in ensuring the region flourishes.”

She expects the brand will have an enormous appeal, especially to people who have never cruised before. Analysts have identified a potential market of approximately 1 million North Americans interested in social impact travel.

Those potential cruisers fall into three categories of fathom travelers:

“fathom will cater to an underserved market of consumers who want to have a positive impact on people’s lives, and aren’t always sure where to begin,” said Arnold Donald, CEO of Carnival Corp. “We believe travel is a meaningful way to allow for personal growth while making purposeful and engaging contributions in the world.”

In addition to leading the new fathom brand, Russell will work with Carnival Corporation’s nine other brands in her role as Global Impact Lead on social impact strategies and opportunities.

“With fathom, we are building one-of-a-kind, collaborative community social impact models and experiences and a solid network of reputable local and global NGO partnerships,” she says.

“As fathom grows and evolves, we will continue exploring additional fathom destinations and powerful brand partnerships we can establish, both within the Carnival Corporate family, and also more broadly outside the corporation with other like-minded impact brands.”

The brand’s first “social partner” destination will be the Puerto Plata region of the Dominican Republic, where Carnival Corp. has been developing the new destination of Amber Cove.

The country is rich in natural beauty, but many of its citizens face serious challenges – lacking food, clean water, jobs, and serviceable roads.

To make a difference, fathom has partnered with two organizations deeply rooted in the Dominican Republic, Entrena and the Instituto Dominicano de Desarrollo Integral, Inc. (IDDI).

A portion of every ticket price will go directly to the partner organizations, and since they already have a long history of working in the country, fathom travelers will be able to make contributions that count.

When not participating in social impact activities, travelers will enjoy exploring the beauty of the region, experiencing the many Dominican beaches and sites of interest, or participating in any one of the recreational activities available to cruisers visiting Amber Cove.

The brand will begin its outreach with 7-day cruises on Adonia, a 710-guest ship that has sailed for the British line P&O Cruises since 2011.

Adonia was built in 2001 as the last of the luxurious “R” ships for Renaissance Cruises, an elegant line that specialized in boutique travel experiences. In 2003, she became the sole cruise ship in Swan Hellenic’s fleet, then in 2006 was refitted for service in the Princess Cruises fleet as Royal Princess.

After another refurbishment, she was christened by Dame Shirley Bassey. Despite going from an American cruise brand to a British one, the ship’s style did not require a great deal of upgrading. With wood-style paneling, a grand staircase and traditional artworks, her ambience and décor keep with the traditions of cruising while maintaining the modern elements of a 21st-century ship.

Adonia is designed to offer an intimate cruising experience, in which a small group of travelers develop a sense of camaraderie and friendship that comes with being surrounded by familiar faces.

The first ship in fathom’s fleet will offer onboard activities and entertainment as well as practical education, including an orientation on the Dominican Republic, Spanish lessons, impact activity training, creative workshops, regionally inspired foods, a spa complex, and a fitness center.

Beginning in June 2015, travelers may reserve a spot on upcoming fathom sailings at www.fathom.org or by calling 1-855-9fathom. Prices for the 7-day trip to the Dominican Republic start at $1,540 per person, which includes an exterior cabin with a window, all meals on the ship, onboard social-impact immersion experiences, and three on-shore social-impact activities.