Five Faves: Rums of the Caribbean 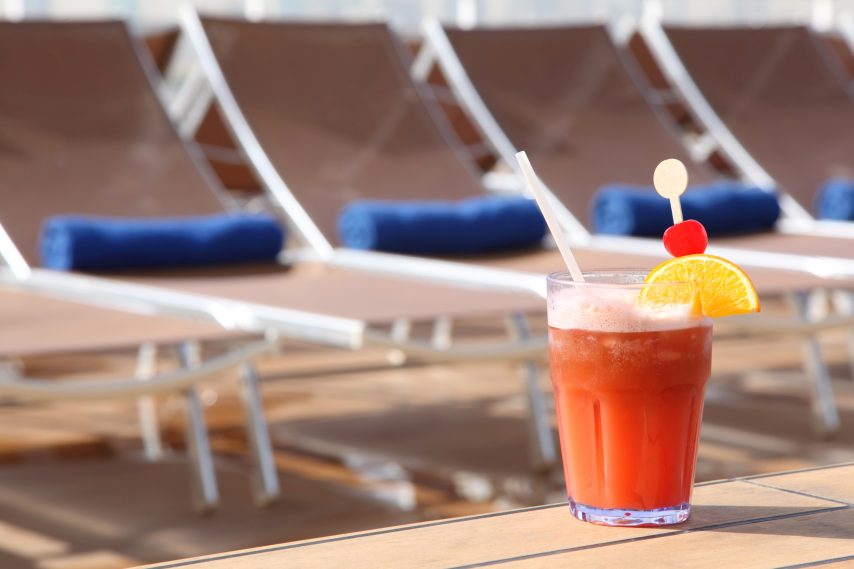 Rums of the Caribbean

A guided tour through the finest spirits of the islands.

If I say the words “cruise vacation” to you, chances are you immediately get a picture in your mind that has three things in it — a ship railing, an endless blue horizon, and someone sitting in the sun holding a glass of something sweet, strong, and colorful.

Rum drinks are as much a part of the adventure as snorkeling and reggae. And they’ve got something extra — local flavor. Every port in the Caribbean has a particular kind of rum that’s part of the place’s identity, from San Juan’s Ron Rico to Barbados’ Mount Gay. Some bottles you can only find if you’re lucky enough to visit the island they come from (a fact that has inspired dedicated rum-themed cruises).

But all of them can put a Caribbean cruise in your glass.

Here’s a first-person guide to five of our favorites, one cocktail at a time.

This smooth, ever-so-slightly floral, white rum was originally distilled in Cuba in 1872. The company survived the Spanish-American War and Prohibition on the island, and, after Castro’s rise to power, the founding family carried on in exile. Today, Matusalem is bottled in the Dominican Republic by the great-great grandson of one of the founders, and regularly wins awards around the world. If your ship calls on Santo Domingo, La Romana, or Puerto Plata, seek out a bottle.

This was Cuba’s most popular rum during the years when Ernest Hemingway lived in Havana, writing, fishing for marlin, and drinking rum at the El Floridita. Bartender Constantino Ribalaigua whipped up a few new cocktails for his famous patron, including what became the novelist’s favorite…

This is sweeter than you might expect, thanks to the grapefruit and liqueur, but not a sticky-sweet drink. It’s very refreshing, actually, like air conditioning in a glass. Perfect for a hot day looking out at palm fronds and golden sand baking in the sun.

But we shouldn’t linger here, we’ve got a new port to explore.

From the island of Jamaica comes this buttery beauty of a golden rum. It mixes well, but is mellow enough to sip on its own. Beneath the flavor of molasses, there are hints of vanilla, amaretto, cream, and cocoa.

They age it in oak casks, you know.

It would hold its own in place of the whiskey in a manhattan, but why not try something a little more … Caribbean? Let’s see how it performs in…

This recipe is based on Jeff Berry‘s transcription from the 1937 notebook of Dick Santiago, who served these legendary drinks at tiki hotspot Don the Beachcombers.

Put all ingredients into a blender with 6 oz. ice, blend for five seconds, pour into a tall glass garnished with mint.

That’s a fruity concoction. Can’t be that strong, can it? Oh, but it is.

Keep away from the grown-ups’ juice, children. It’ll make your eyebrows go all curly. One more sip for me, though.

Now, where were we?

Oh, yes. Traveling south from Jamaica we find the beauty of the Eastern Caribbean, St. Lucia, “the Helen of the West Indies.” They brew Piton beer here, and make some of the world’s best dark chocolate. It’s also the home of a fine distillery, which makes a fine dark rum, just fine.

I don’t know who Admiral Rodney was, but he must be proud. Oh, it says here on the label — he beat the French in the Battle of the Saintes. Thank you, Admiral. This fine, fine rum tastes like honey and dried fruit, with an aftertaste of caramel and flan.

If you must mix it, it’s especially fine in this…

In a tall glass filled with ice, pour ginger beer. Top with rum.

Let it gradually fall to the bottom of the glass. Garnish with lime.

That’s a refreshing drink. Makes the … what’s it? Digestion. Aids the digestion. Ginger, you know.

If you ever find yourself experiencing mal de mer in high seas, there’s Demerol, which is not much fun, and then there’s the dark ’n’ stormy, which is. Settles the stomach. Trust me, I’m a doctor of journalism.

OK, so you’ve got dark rum, and then you’ve got darkest rum. The rum of moonless nights and deepest oceans. St. Croix in the U.S. Virgin Islands gives us this warm blanket of a molasses-rich rum.

If you like gingerbread houses, Boston brown bread, sweet barbecue, and shoofly pie, you need this rum in your life. If you’re not a molasses fan — stay back! This is dark stuff.

Bartenders like to float black strap on all kinds of things because it’s so dramatic and strong-flavored. But it’s the ess … essen… it’s the ingredient you need to make a…

Add all ingredients to a rocks glass. Add ice. Stir. Garnish with lime.

Mmm. It’s easy to forget how easy these go down. Almost like pumpkin spice.

Forget eggnog, this here is th’ perfect holiday dri– whoah, the ship was rolling a little there, wasn’t she?

We should go talk to the captain. That’s what we should do. Keep him steady on course.

But first, one more. For courage.

Britain built an empire fueled by regular rations of this, the rum of the Royal Navy. Bottled in the British Virgin Islands, shipped around the world from Road Town, Tortola. This smooth, golden rum is what grog was invented from. It kept Jack Tar before the mast and the keel even before a steady wind.

All hands on deck! We’ve a rum here! It’s a rum rum, though they call it “the single malt of rum.” Who needs malt? They don’t put anything extra in this — no flavoring, just rum. It is scotchy, but tangy.

Mix liquid ingredients, pour over ice in a glass or a mug, grate nutmeg over the top. Garnish and serve.

Missster Christian! This is no piña colada. Man the cannons, ye swabs. They’re showing their broadside!

Up spirits, lads! Splice the mainbrace! To the captain’s health!