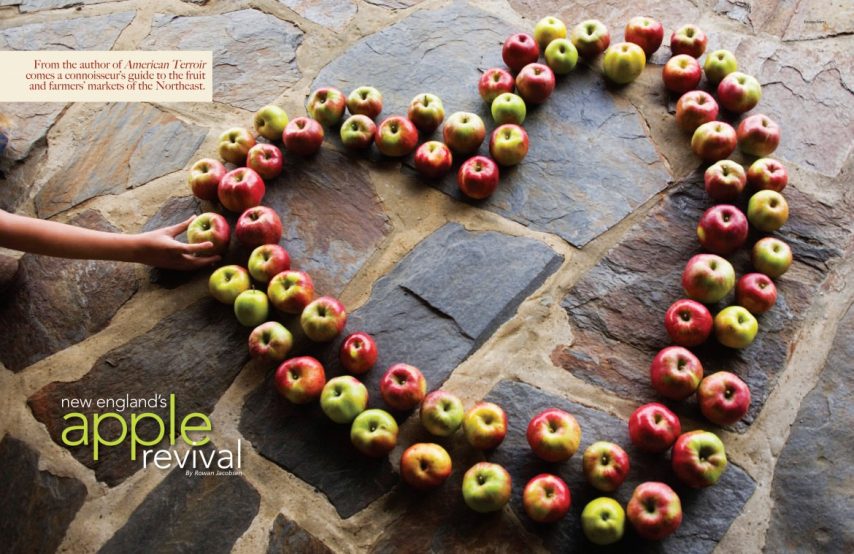 From the author of American Terroir comes a connoisseur’s guide to the fruit and farmers’ markets of the Northeast.

“We’re now in the midst of an heirloom apple revival, with dazzling varieties of every size, shape, and color spilling from farm stands every summer and fall.”

Although we’re lucky if we find half a dozen varieties of apples in a typical supermarket, an astounding 16,000 named varieties of apples have existed in the United States since the colonists brought the first trees over from England. Back then, every family farm kept different apples for different needs. Some came ripe in July, some in October, and some wouldn’t sweeten up until February. Some made great pies, others the fluffiest apple sauce. There were extra-juicy varieties for cider, and low-juice specialists for slicing and drying. The vast majority of those varieties have gone the way of the dodo, but we’re now in the midst of an heirloom apple revival, with dazzling varieties of every size, shape, and color spilling from farm stands every summer and fall. With its apple-perfect climate, New England has always been a hotspot of apple diversity, and no visit to the region is complete without sampling its iconic fruit. These eight varieties epitomize the New England soul.

With its bright red skin and sweet, sprightly taste, Baldwin was the No. 1 apple of New York and New England from 1850 until well into the 20th century. Highly productive and easy to store, it was a grower’s dream. Its only weakness was a susceptibility to cold. When the brutal winter of 1933-34 killed most of the Baldwin trees in the Northeast, growers replanted with the more cold-hardy McIntosh, and Baldwin faded into obscurity. Still the favorite of many old-timers, Baldwin is staging a comeback in New England’s increasingly mild modern winters.

In the days before refrigeration (much less air shipments from the Southern Hemisphere), certain apple varieties were prized for their ability to keep in storage right through the winter. Black Oxford was a champion among keepers, and it became Maine’s most famous apple….